It is with great sadness that we report the passing of Mrs. Adira Chana Boltshauser a”h at the age of 23. Adira, of Kiryat Sefer, was the wife of Yehudah Boltshauser and a daughter of Dr. Seth and Mrs. Joni Miller of Lakewood, NJ.

Adira suffered a seizure last night and a mobile ICU unit arrived to attempt to stabilize her. While transporting her to the ambulance, Adira suffered a second seizure, though she was still conscious. She was taken to the ICU at Assaf Harofeh Hospital in Tzerifin. Adira had been expecting at the time, with several weeks until her due date, and about 10 minutes from the hospital, Adira stopped breathing, which meant that the baby was not receiving any oxygen. Immediately upon arrival, Adira was placed on a respirator and an emergency cesarean section was performed. Boruch Hashem, a healthy baby girl, the Boltshausers’ first child, was delivered. The baby was born in shock, however, and was transferred to the pre-natal ICU. 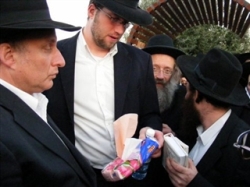 The doctors learned that high protein levels and high blood pressure were the cause for Adira’s seizures.

This morning, Adira’s neshama returned to its Creator.

Hespeidim are not supposed to be said on Rosh Chodesh, Yehudah Boltshauser said following the levaya, but he told the Haredim news agency, “One of the things my wife would do was go to shul every Shabbos mevorchim for Birchas Hachodesh, even when it wasn’t easy. This week,” he said, “we went o Ramot Daled, to Rav Schwartzman, and she went to shul for Birchas Hachodesh. The last vort I told her was on Birchas Hachodesh. Why, I asked her, do we daven for ‘chaim aruchim’? Didn’t we already say it on Rosh Hashanah? Why the need to say it every month? The explanation may be that chaim aruchim does not only refer to actual life, but that the job every day is to do what Hakadosh Boruch Hu wants.

“This is what characterized my wife,” R’ Yehudah said. “Every day she fulfilled her mission, and she thus truly merited arichas yomim, for she completed her task in life early.”

Yehudah commented that he has seen “so many miracles” with the fact that the baby, in her condition, according to doctors, had only a five percent chance to survive, and yet, boruch Hashem, the baby is completely healthy.

“Hakadosh Boruch Hu took the life of the mother and gave it to the baby,” he said.

“The chizuk to me,” he concluded, “are the hundreds of people who came to daven and help.”

The levaya was held this afternoon and kevurah took place in Beer Yaakov. Adirah was buried next to her mother-in-law, who was niftar this past summer.