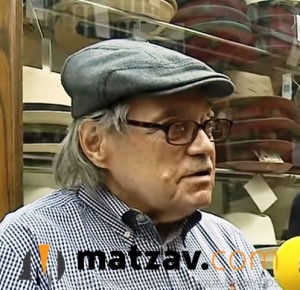 It is with great sadness that we report the passing of Mr. Shloime Elimelech (Stanley) Goldstein, owner of the renowned hat store chain Bencraft Hatters.

Stanley was known to frum Jews around New York and the world over as the owner of the Bencraft hat store in Brooklyn’s Williamsburg area that was established in 1949 by his father, Ben Goldstein.

Stanley joined the business in 1954, which much later expanded to a second location on 13th Avenue in Boro Park, Brooklyn.

Yidden of all types purchased their hats from Stanley for generations; the hats were sold with his unique personality and charm.

“He was a very charming, personable and generous person,” Bencraft employee Yitzi Feigenson told COLlive.com. “He had a smile that really struck you. He was a true gentleman.”

A resident of Kew Gardens Hills, Queens, Stanley, along with his son Steven, were generous supporters of a number of causes.

“He was a legend,” said long-time employee in the Boro Park store Asher Bitton. “He was a baal tzedakah to so many people and organizations. People had no idea of the extent of his kindess.”