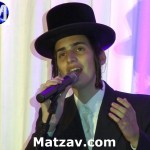 The most prestigious concert in the world of Jewish music is the HASC concert, the annual event to benefit the beloved and acclaimed Hebrew Academy for Special Children summer camp. The concert is held each year in midtown Manhattan.

Producers of the event reached out to popular singer Motti Steinmetz to perform at this year’s event, but he politely turned them down. The reason? Motti has accepted upon himself to follow certain rules of tznius – such as not performing in front of mixed-seated audiences – and so he felt compelled to turn down the offer. Motti has maintained his kabbolah about when and where to perform since he was a bochur.

As reported here on Matzav, Motti celebrated his marriage this past month.

This year’s HASC concert, which will feature Yaakov Shwekey, Abie Rotenberg and others, will be the 29th show. It will be held in January.

Motti stressed that he was deeply honored to be asked by HASC to perform. Despite the financial loss involved, however, he had to turn down the offer.