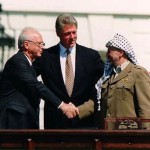 While most Israelis miss former prime minister Yitzchak Rabin, who was assassinated 20 years ago for political reasons, an even larger proportion do not believe the 1993 Oslo Accords—for which Rabin was the foremost champion—were justified.

A new Israel Hayom poll on Rabin and his legacy found that most Israelis still respect his efforts to strike peace with the Palestinians. Seventy-six percent agreed that Rabin was a respectable leader and 55 percent said they missed him.

But when it came to the Oslo Accords, only a third of respondents thought that the peace process was justified, while 42 percent felt the accords were unwarranted. Twenty-five percent did not have an opinion on the matter. Asked whether they supported the Oslo Accords at the time they were reached, 33 percent said yes and 38 percent said no.

The poll was conducted among a representative sample of 504 Jewish Israelis over the age of 18.