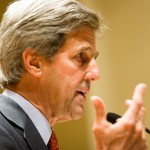 a 40-year-old Israeli woman was stabbed at the Gush Etzion junction on Wednesday afternoon. The terrorist was arrested.

The incident followed another attack in which a Palestinian terrorist tried to stab Israeli soldiers in Chevron. The terrorist was shot and killed.

Amid the terrorism, after initially urging Israel to take steps “that empower Palestinian leaders to improve economic opportunity and the quality of their lives on a day to day basis,” U.S. Secretary of State John Kerry called on Palestinian leaders “to cease the incitement of violence and offer something more than rhetoric.”

The Palestinians need to “propose solutions that will contribute in a real way to the improvement of life, to the reduction of violence and to the safety and security of Israelis,” Kerry said at a speech at the Carnegie Endowment for International Peace in Washington, DC.

Kerry’s comments came the same day that Palestinian Authority President Mahmoud Abbas called on the U.N. for “protection” and said it is Israel that is “systematically violating the principles of international law.”