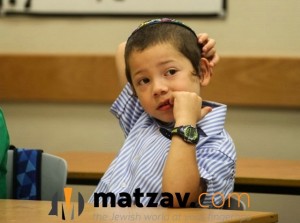 Moishy Holtzberg, son of Rabbi Gavriel and Rivky Holtzberg, will be traveling to New York this week to take part in the Kinnus Hashluchim of Chabad this Wednesday.

Sources indicate that Moishy will actually lead the recitation of Tehillim at the Chabad event.

Gavriel and Rivky Holtzberg were killed in 2008 when 10 Pakistani men associated with the terror group Lashkar-e-Tayyiba stormed buildings in Mumbai. At the Nariman House, on November 27, Moishy’s nanny, Sandra Samuels, escaped from the building carrying the two-year-old. Seven people were killed in the three day siege of the building.

Moishe has been raised since the tragedy by his grandparents, Rabbi Shimon and Yehudis Rosenberg.