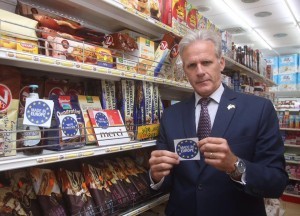 Israeli Knesset member Michael Oren has launched a campaign to label European products in Israeli supermarkets, ahead of the European parliament’s announcement of guidelines on how to label Israeli products from the settlements in the West Bank.

“We want to show the Europeans how we feel when they mark our products,” said Oren, speaking to Israeli Channel 2‘s Oded Ben-Ami from the aisles of an unnamed Israeli supermarket.

Oren, who posted a video of the interview on his Facebook page, clarified that he was not calling for a boycott, “but just as the Europeans want consumers to know where the Israeli products are coming from, it’s also important that Israelis know that the moment they purchase crackers from Spain or beer from Belgium, you see, or chocolates from Germany, they should know that they are supporting policy that is actually antisemitic.”

The American-born Oren — who served as Israel’s ambassador to the US and subsequently wrote Ally: My Journey Across the American-Israeli Divide, a best-selling book about his experiences with the Obama administration — noted that although there are many territorial disputes and “occupations” in the world, the EU “does not label products from Turkey, China or India, just Israel.”

He also attacked the EU for choosing not to criticize the Palestinian Authority for refusing to negotiate with Israel or to condemn Palestinian incitement.

“Europe has a very long history of antisemitism, and this includes labeling products made by Jews. We are returning to very dark times,” said Oren. “If they can label our products there, then we can label theirs here.”

The EU plan to label settlement products is widely condemned by Israeli officials. Prime Minister Benjamin Netanyahu compared it to Nazi boycotts against Jews. European diplomats say the labeling will put the spotlight on the line separating Israel’s internationally recognized borders, and the territories it came to control after its victory in the 1967 Six Day War, where the Israeli settlements whose products would be labeled are located.