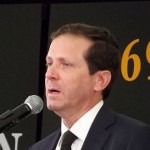 MK Isaac Herzog said this week that Israeli politicians should not be making “careless” visits to the Har Habayis, quoting a p’sak from none other than his zaide, former chief Rabbi Rav Yitzchok Isaac Halevi Herzog, after whom he is named.

The p’sak was issued in 1948, when the Hagana was working on freeing liberate the Old City of Yerushalayim.

At the time, David Saltiel, commander of the Hagana in Yerushalayim, asked Rav Herzog for his guidance.

Rav Herzog said that after Shaltiel and his men remove the enemies from the Har Habayis, they should close it up.

“Lock the place up and throw away the key,” MK Herzog quoted his grandfather as saying.

Herzog added: “Rabbis throughout the ages, from Rav Avrohom Yitzchok Kook onward, strictly prohibited going up on the Har Habayis. And now there is a minority group of rabbis encouraging Jews to go. Even Jewish residents of the Old City oppose it, because they understand the sensitivity, aside from the halachic issues.”

Activists who encourage people to go on the Har Habayis are “hypocrites,” Herzog said, because “even the strictest religious Zionist yeshivos are opposed to it.”