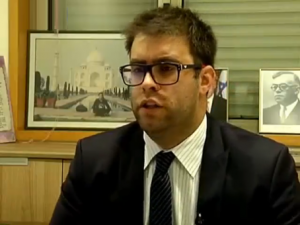 Politicians from left and right have expressed their outrage over comments made by Likud MK Oren Hazan towards Yesh Atid MK Karin Elharar, in which he mocked her about her disability. Knesset Speaker Yuli Edelstein, who is a fellow Likud member, implied that Hazan should be severely punished by stating that the coalition “is expected to take practical action” against Hazan, whom he described as prone to damage.

Late Monday night, as the Knesset assembly was voting on a law amendment, Hazan shouted towards Elharar, who suffers from muscular dystrophy and is bound to a wheelchair, “Need Issawi to help you?” He was referring to an incident from last week when he accused Elharar of double-voting because she had asked Meretz MK Issawi Frej to help her put in her vote.

MK Frej later wrote to Knesset Speaker Yuli Edelstein, requesting that Hazan be denied participation in Knesset assemblies. “The Knesset must reclaim its respect,” he said. “This isn’t the first time, not the second or third, that we are witnessing improper behavior coming from MK Hazan, in addition to reports about his controversial lifestyle prior to joining the Knesset.”

Hazan’s father, Yechiel, lost his Knesset seat in 2003 after he was caught casting a double vote in the Knesset assembly, and then trying to remove a computer from a Knesset storage room to cover up his act. Since becoming a Knesset member over six months ago, his son has already been at the center of several scandals, including TV reports about his previous lifestyle of using crystal meth and soliciting prostitutes while running a casino in Bulgaria.

Several organizations for the welfare of people with disabilities have announced they would boycott MK Hazan and not take part in any political dialogue with him. A similar statement was made by the Zionist Union party. Its Chairman, MK Isaac Herzog, said that Hazan’s conduct was a stain on the Knesset and added: “The real disgrace is that the Chairman of Likud, Prime Minister Netanyahu, is making zero effort to remove the stain, as usual.”

Yuval Wagner, the chairman of Negishut Israel Association, stated that he was “shocked, hurt, furious, but mainly disturbed” by Hazan’s remarks. “I myself suffer from severe disability in my hands, and I am regularly assisted by other people in doing everyday actions. So for me, this was highly insulting.”

“Even though we’re talking about Oren Hazan, a man we shouldn’t expect much from,” Wagner continued, “he is still an MK and people are influenced by him. We intend to turn to the Knesset’s Ethics Committee and get him to apologize for Karin Elharar and the entire population of disabled people in Israel.”