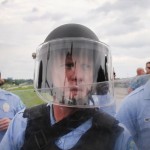 While a grand jury debates whether to charge Officer Darren Wilson for his role in killing Michael Brown, authorities in Missouri are devising plans to control possible violence that they believe could erupt if Wilson is not indicted. Authorities hold meetings two or three times a week to discuss plans.

FBI has been included in the discussions, and Missouri law enforcement is seeking intelligence on out-of-state agitators from other departments. St. Louis County Police Chief Jon Belmar said one focus of the meetings is how to respond given the backlash officers faced when they deployed military gear in Ferguson. Ferguson Mayor James Knowles said he fears if there’s violence, “the unrest is going to be far beyond the city of Ferguson.” Read more.