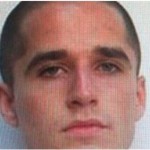 Boruch dayan emes. David Menachem Gordon, the 21-year-old IDF soldier who had been missing since Sunday, has been found dead.

David was an American “lone soldier” from Ohio, Gordon. He was a member of the Givati infantry brigade.

David was last been seen at about noon on Sunday at the Medical Corps facility in Tzrifin, where underwent  dental treatment. He had be slated to then travel to Cholon, but never showed up, prompted a massive search. He was found with his army weapon next to him. No further details have yet been released.