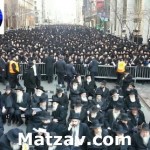 The minute Gedolei Yisroel resolved to convene an Asifas Tefilah in Lower Manhattan, Agudas Yisroel reached out to Misaskim.  Misaskim Preparedness Team swung into action. It immediately contacted dozens of law enforcement and other agencies to assure that the gathering would result in a huge Kiddush Hashem. The key agency was, of course, the New York Police Department, with which Misaskim maintains a constant and productive relationship. The NYPD pulled out all stops to guarantee the security of the tens of thousands of Jews who came to the Tefilah gathering to implore shomayim.

In addition, the Misaskim team also met with a number of other law enforcement agencies, including the New Jersey State Police to assure a proper flow of traffic from many New Jersey communities. Police Departments in Monsey and Lakewood (assisted by Meir Lichtenstein, Lakewood Township Committee Member) were also contacted to facilitate the large number of busses that were coming from those communities. The Port Authority was also involved in keeping the tubes of the major crossings into New York running smoothly.  The Triborough Bridge and Tunnel Authority was engaged to keep open all lanes of the Brooklyn Battery Tunnel which are typically closed on weekends for maintenance and to secure safe passage of thousands of people going through.

A major task of the Misaskim team was to work with the NYC Transit Authority to accommodate the thousands who would be using the subway system. The MTA added “gap trains” to accommodate the masses on a system that would otherwise be on a weekend schedule. There was a major increase in the presence of emergency personnel on the subway system in Brooklyn and Lower Manhattan. There were so many people trying to board the trains and it took a little longer than anticipated for part of the crowd to catch their train. When it became apparent that large numbers of participants would be using the Staten Island Ferry, many from Lakewood who parked their cars in Staten Island, Misaskim notified the proper authorities in Staten Island and Manhattan to make sure that there would be enough personnel to handle the large crowds.

The logistics of parking hundreds of busses  as well as creating corridors for the Gedolei Yisroel and rabbonim who were at the asifa was another major issue that had to be dealt with.

It was also left to Misaskim to alert all the agencies that the asifa was coming to an end so that all procedures in play before the gathering were reversed. Another task was to coordinate the significant presence of Hatzolah in Brooklyn and Manhattan with 15 ambulances made available at the asifa. There were four incidents that involved Hatzolah. All of these arrangements were in close tandem with Agudath Israel of America, headed by Rabbi Shlomo Gertzulin, which shouldered the major burden of organizing the unprecedented asifa.

A major concern for the NYC Sanitation Department was to have the area, which is the financial hub of New York, clean and returned to “normal.” But Sanitation officials were astounded that all of the equipment that they had prepared was not necessary, something they never experience in other mass gatherings.

The best accolades came from ranking officials of the NYPD who could not believe the order and exemplary behavior of a crowd that filled ten blocks and numbered in the tens of thousands.

For the Misaskim Preparedness Team, its ongoing communications with government agencies and excellent relationship with such agencies as Hatzolah once again paid off in a huge Kiddush Hashem.