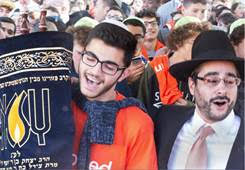 More than 250 teens, a majority of them public school students from across the Midwest, attended the Fall Convention in Chicago of Midwest NCSY, the Orthodox Union’s youth movement, where they celebrated the dedication of a new Torah scroll this past weekend. “The event was the central focus of the entire weekend,” said Rabbi Donny Schwartz, regional director of Midwest NCSY. “The NCSYers left this Sunday with a deeper understanding of the centrality of Torah in their lives and feel that they have a unique connection to it, one that not everyone has a chance to truly experience. This Torah will be their legacy as much as it is ours.”

The story of how the new Torah scroll came into being started with a missing letter.

Last December, as the Midwest NCSY advisers read the Torah portion Vayigash from the Sefer Torah at its annual winter Shabbaton, they noticed that one of the letters was missing in the third aliyah. The Torah had been borrowed from a local Chevra Kadisha (burial society) that hadn’t noticed the error.

When the Sefer Torah was found to be posul, unusable, Midwest NCSY turned the situation into an unforgettable learning opportunity: the chance to welcome a new Sefer Torah to the Jewish people — a Sefer Torah that was partially written by the NCSYers themselves.

The posul Sefer Torah quickly became a topic of conversation at the Shabbaton. Advisers used the opportunity to explain the importance of each letter of a Sefer Torah and how even just one tiny mistake can invalidate an entire Torah scroll. The message to the NCSYers was clear: every Jew is important, regardless of affiliation or background, and that each small action, both good and bad, can have a huge impact on the world and the Jewish community.

During seudat shlishit, the third meal of the Shabbaton, the idea of Midwest NCSY having its own Sefer Torah was brought up. Within minutes, donors and lay leaders pledged more than $50,000 to pay for a new Sefer Torah.

“We are fortunate to have donors and lay leaders who care so passionately about the total experience that NCSYers have through our programs,” said Rabbi Schwartz. “It was inspiring to see how quickly our guests joined together to help NCSYers have a Torah to call their own. At that moment, our donors and lay leaders recognized the opportunity they had to make an impact on current and future NCSYers and they did not hesitate.”

Moreover, this Sefer Torah would be special, since the NCSYers would be able to write a letter in it themselves, fulfilling the mitzvah to write one’s own Sefer Torah.

“An opportunity like this is truly unique,” said Rabbi Moshe Isenberg, executive director of Midwest NCSY. “From what at first seemed like such an unfortunate error, a beautiful and fortuitous event was born. It’s the perfect metaphor for the NCSY message. Just like every letter matters in the Torah, so too does every individual matter in Klal Yisrael.”

Since that weekend, Midwest NCSY has also worked to raise money for scholarships in honor of the upcoming Hachnasat Sefer Torah. “It has been an incredibly special project,” said Ari Shabat, chairman of Midwest NCSY. “Since December we’ve raised over $180,000 in total for the writing of the Sefer Torah and scholarships for NCSYers.”

Rabbi Micah Greenland, international director of NCSY who is based in Chicago, commended the project. “The money raised for the Sefer Torah not only ensures that Midwest NCSY will have its own Torah scroll, but the money raised will be used for NCSY programming and scholarships to ensure that the single letter that the NCSYers write is the first letter in a long journey towards a deeper connection to their heritage.”

Midwest NCSY has also ensured that as many teenagers as possible are able to participate in the mitzvah.

“We’ve taken the final klaf (parchment) to cities throughout the region,” said Mr. Shabat. “Teens in Minneapolis and Kansas City (among other cities) are all celebrating the same mitzvah together. They’re learning and participating in the writing of the Torah.”

Nala Slobodyanyuk, who was at the writing in Minneapolis, said, “I’d never seen a sofer (scribe) write a Torah. It was new to all of us and opened my eyes to how real a Sefer Torah is.”

NCSYers themselves have also been involved in raising money. Akiva Garfinkel, who serves on the Midwest NCSY Regional Board, helped organize a group of his fellow teens to raise money for the cause as well. Together, the teens raised around $1,000 in one evening. “It was touching that fellow NCSYers wanted to take the time and help fundraise for this event,” he said.

“It means a lot that people from all different communities have stepped up to pay for this Sefer Torah and to help NCSYers,” said Akiva, a junior at Ida Crown Jewish Academy in Chicago.