The big news in Miami last week had nothing to do with the beautiful weather and the bright sunshine.  It was about a unique and exceptional program called the Tefillin Awareness Project (Hachana K’halacha) that was presented to the community to guide them in the proper halachos of hanochas tefillin.

The Tefillin Awareness Project (TAP) was developed by a Flatbush askan to raise awareness of the proper way to perform this precious and almost-daily mitzvah.  On designated mornings, qualified sofrim visit shuls to check and adjust the tefillin of the morning mispallelim.  They adjust the placement of the Rosh, the Yad, both Kesharim, and they inspect the blackness, the width and the condition of the retzuos, the tefiros, the re’buah, and more.  The program has already effectively assisted tens of thousands of people in hundreds of shuls around the New York area.

But this is the first time that TAP had travelled to Miami.  And it all happened as a result of a chance meeting between TAP Director R’Avrohom (Bumie) Schachter and Bobby (Yerachmiel) Rosenberg.  “I met Bumie at an Agra D’Pirka shiur,’ Bobby remembers.  “And when he described the program to me, I was intrigued.”  The two decided to bring TAP to South Florida, and Bobby enthusiastically offered to sponsor it himself l’iluy nishmas his parents, Gedalia ben Sholom Halevi, O’H, and Tova Feiga bas Zelig, O’H.

“The truth is,” says Bobby, “I didn’t know exactly what we were getting into, but it sounded too good to pass up.”  He consulted with Rav Yaakov Gross, Rosh Kollel of the Miami Beach Community Kollel, who encouraged him to pursue it.

Three expert sofrim, Rabbi Shimon Zeide, Rabbi Moshe Lieb Lebowitz, and Rabbi Yosef Holtzer, arrived from New York on Motzei Shabbos.  They began inspecting tefillin early on Sunday morning at Congregation Beth Israel, one of Miami’s oldest shuls.  The shul’s Rov, Rabbi Bixon, was delighted to set an example for his mispallelim and was among the first in line to have his tefillin checked.  The morning turned out to be a huge success.

For Bobby, it was especially meaningful.  “This is where I was bar mitzvah’d,” he says.  “I sat in this shul next to my father for twenty years and the memories were powerful.  It was a special zechus to be sponsoring the program here in his memory.”

As a result of several local events, some prominent community leaders were in Miami at the time, and were happy to join the program.  Rabbi Chaim Dovid Zweibel, Rabbi Doniel Neustadt, Rabbi Mordechai Hershkowitz, and Rabbi Ari Hoberman all participated in the tefillin program.

On Monday morning, the sofrim set up shop at Tower 41, inspecting tefillin at both the building’s minyanim.  Among the many who had their tefillin adjusted was Holocaust survivor Reb Yitzchok, who was overwhelmed by the morning’s events.  “I just want to tell you,” he said, “that what you did here today is one of the greatest things you could have done.  You were mezakeh so many people in putting on tefillin the way it should be worn.  This,” he said, “is gaonus!”

The sofrim spent Tuesday morning checking tefillin at both Carriage Club buildings, North and South.  One youngster, recently bar mitzvah’d, joined the many others who had their tefillin adjusted. The next day he told his father, “I don’t know what they did to my tefillin.  But I just feel a lot better than I did yesterday!”

That afternoon, the Mechina of South Florida at the Talmudic University under the leadership of its Rosh Yeshiva, Rav Yochanan Zweig, was privileged to host the Hanacha K’Halacha Tefillin program.   Hundreds, including talmidim, Kollel members, and Rebbeim, waited patiently on line.  “At one point,” says Bobby, “one of the bochurim started singing ‘Hashevaynu Hashem Elecha,’ and soon everybody joined in.  Then they started dancing.  It was an unforgettable moment!”

On Wednesday, the sofrim were stationed at the Miami Beach Community Kollel, where the program was welcomed both by kollel members and balabatim who participate in the Kollel Boker at that location.  At one point Bobby looked around and was amazed to see the long line of mispallelim that had formed.  “These people really want to do the mitzvah in the proper way,” says Bobby.   “I cannot begin to describe the nachas I felt.”

At each location, Bumie delivered a five minute pitch explaining the significance of the program.  “I point out,” he says, “how we’re all so busy choosing a kosher esrog before Sukkos and the most mehudar matzohs for pesach.  But the mitzvah of tefillin is a d’oraisa that is performed 300 days a year!  Too many of us are simply not placing our tefillin properly or are wearing tefillin that are stretched out, discolored, or otherwise unfit.”

The overall response from Miami’s many residents, its winter ‘snowbirds’, and its occasional tourists, was overwhelming.  All told, says Bumie, hundreds in the area had their tefillin checked, with many needing significant adjustments and improvements.  But the greatest aspect of the entire project was the awareness that was created through this initiative.

During their visit, the sofrim were also available to check mezuzahs, offering a golden opportunity for vacationers who own condos in Miami and haven’t had their mezuzahs properly checked in years.  According to Bumie, “By the end of the week, 25 of the 350 mezuzahs that were checked turned out to be posul.”

As for Bobby, he is still reeling from the impact this has had on the community.  “I’m on such a high,” he says.  “People are still approaching me, telling me how unbelievable it was, how they never expected to get their tefillin checked so easily for free.  It’s the talk of the town and I’m so happy to have had the zechus to be a part of it.”

Local Rabbomin from various shuls have already approached Bumie to bring the program back to South Florida so that nearby Hollywood, Aventura, and other areas can benefit as well.  “We’re not finished here,” he comments.  “Iy’H we’ll be back.”

The hashgacha pratis last week, says Bobby, was powerful.  He tells the story of a 90 year old man living in Tower 41 who somehow missed the opportunity to have his tefillin checked on Monday morning.  He was disappointed, but what could be done?  By the time Bobby found out, it was Wednesday evening and the sofrim were scheduled to leave the area.

But the Ribono Shel Olam works in mysterious ways.

“That night,” says Bobby, “a snowstorm in New York resulted in the cancellation of hundreds of flights.  Our sofrim were stranded in Miami for another day.  I brought this gentleman to see the sofrim and boruch Hashem, his tefillin were checked.”  As it turned out that elderly man’s tefillin needed some major adjustments.

“We think a snowstorm in New York City is a nuisance,” Bobby observes.  “Little do we know that it can also create an opportunity for a 90 year old to do a mitzvah properly.  One never knows how things play themselves out up in Shomayim.”

For more information about the Tefillin Awareness Project, contact shelrosh@comcast.net, or call 718.377.6735. 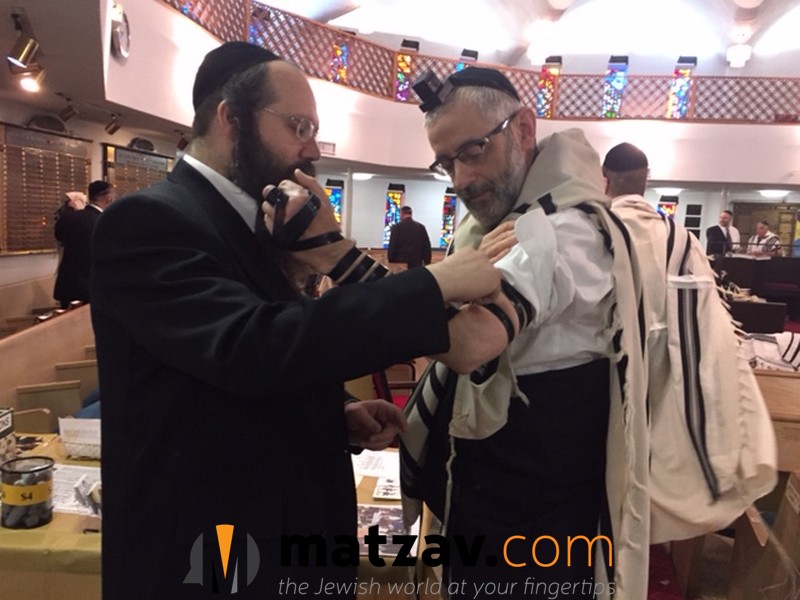 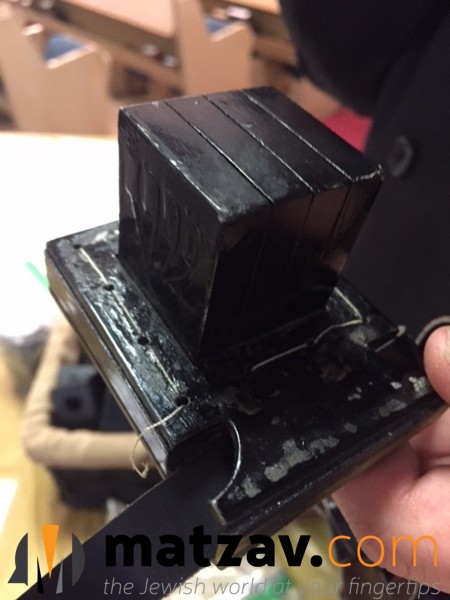 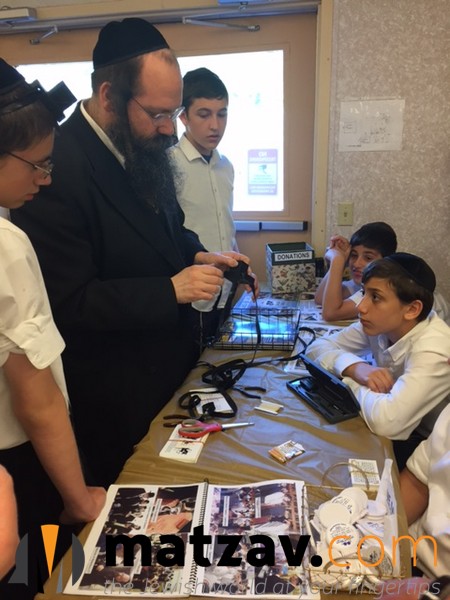 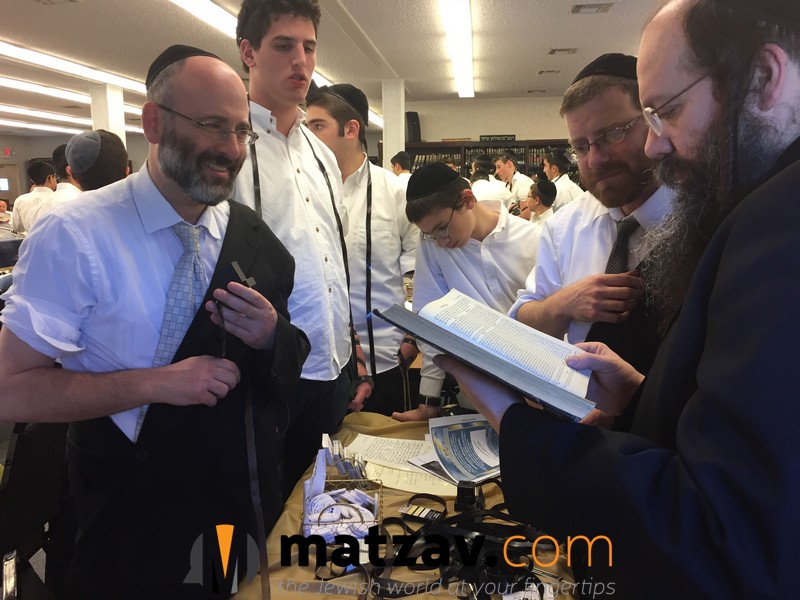 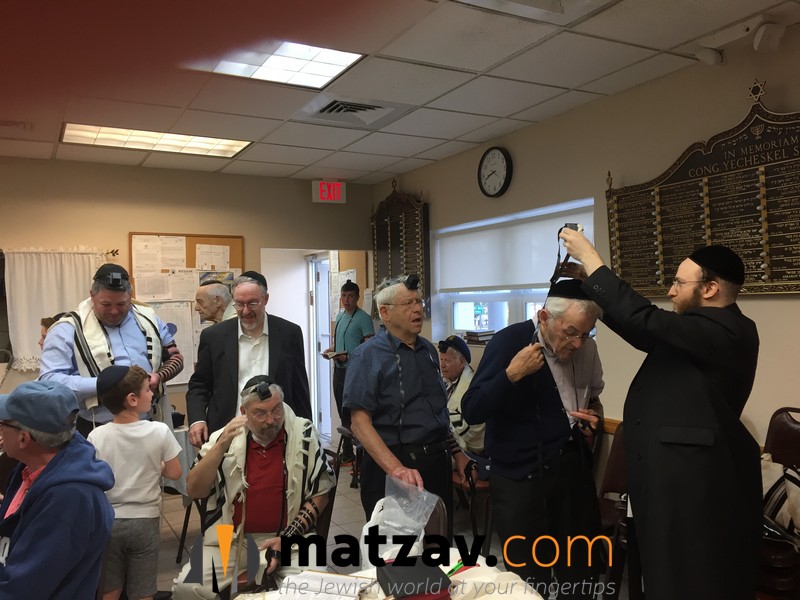