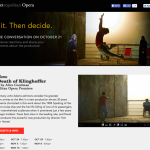 The Metropolitan Opera in New York City has doubled-down on its decision to produce the anti-Semitic The Death of Klinghoffer by setting up a Klinghoffer mini-website to defend and promote the controversial show.

The website responds to the massive backlash against the opera. Its headline reads “See it. Then decide.” The page features a preview of the production, a SIRIUS-XM interview with Director Tom Morris, a link to the text of the previously hard-to-find libretto, along with the ability to listen to musical selections. Beginning October 21 (one day after the opera’s opening), the audience can share comments there about the production. Composer John Adams, in an interview featured on the special page, alludes to finding the “humanity” in both the Palestinian terrorists and their American Jewish victim: “for all of the brutality and the moral wrong that they perpetrated in killing this man, they’re still human beings and there still has to be reasons why they did this act.” Not only is this moral equivalence repugnant but, in fact, Klinghoffer offers an extended apology for the violence via regurgitation of Palestinian propaganda themes.

None of the other 25 remaining operas of the 2014-15 season received the honor of its own webpage. In other words, the Met has not just stood by its decision to stage an opera that glorifies terrorism but compounded this decision by exalting Klinghoffer above all other productions.

Indeed, The Death of Klinghoffer deserves a special web presence, but in the far less grand form of a Twitter hashtag – I propose #TerrorOpera.