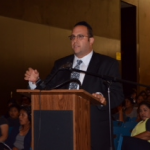 The Agudath Israel’s New Jersey office is happy to report that Title I and Chapter 192 services have been restored in Lakewood, NJ.

Just four weeks ago, nearly 30,000 private school children arrived on the first day of school in Lakewood to find that textbooks, nurses, and remedial services were not provided as required by law. After an emergency meeting called by the Lakewood Board of Education (BOE) and attended by more than 1000 people, nursing services resumed and textbooks were ordered; however, Title I and Chapter 192 remedial services were not restored.

Over the past four weeks, we have been tirelessly advocating on behalf of the affected Lakewood families. I hade the privilege to speak on behalf of the children at the emergency BOE meeting and since then have been frequently meeting with local and state officials, Lakewood activists, members of the Igud HaMosdos (an organization representing Lakewood’s Orthodox Jewish schools) and Rabbi Josh Pruzansky from the OU. Rabbi Chaim Dovid Zwiebel, Agudath Israel’s executive vice president, hosted one of the key meetings in his home with the participation of attorney Ron Coleman, Esq.

We are very pleased that all services have been restored, and we look forward to working together with the New Jersey Department of Education and other representatives of the private school community over the next several weeks to create a permanent solution.

Wishing you all a Gmar Chasima Tova, and looking forward to a year of successful shtadlanus.