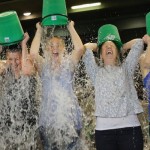 YouTube has proof that we’re all addicted to watching ALS Ice Bucket Challenge videos. It announced today that the collection of videos related to the viral fundraising stunt have gotten 1 billion views, three times the amount for 2013’s “Harlem Shake” craze.

“That, combined with the volume of uploads, makes it one of the biggest video memes in the history of the Internet,” YouTube said.

Despite having a few famous critics, the ALS Ice bucket challenge has been an unprecedented success. So far, it has raised more than $100 million in donations with video participants from more than 150 countries. Read more at Mashable.