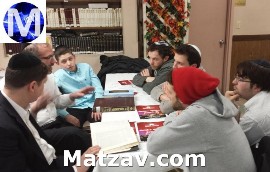 “We mustn’t let feelings of shame bring us down rather they must be a motivator to make us better.” This was the message that Rav Binyomin Eisenberger relayed in his Sunday morning navi shiur at his Bais Medrash in Boro Park. What was most unique about the shiur this past week was that aside from the regular group of two hundred baalei batim, Rav Eisenberger was also addressing college students from across North America. These students had flown in to New York for the Ohr Somayach International Mentor Missions Shabbaton in order to draw inspiration from the community.

Halfway through the shiur, Rav Eisenberger thanked the “esteemed guests” for joining and started to sing “hinei yomim baim.” Within seconds, the entire room had joined in song and the students got up and started dancing. One by one, they filed passed the Rov who gave them each a bracha as the sounds of the voices continued to rise. It is difficult to convey the power of the moment when the niggun reached the words “lo ra’av lalechem…ki im lishmoah es divrei Hashem.” At this moment, brothers were davening for the day when the thirst for the dvar Hashem will bring everyone back to Torah but they were also celebrating the scene of seventy yiddishe neshamos who were imbibing the dvar Hashem in front of their eyes.

This special weekend began Thursday night with opening dinner at the home of R’ Zvi Weinreb. Remarkably, the snow storm that had caused hundreds of flight cancellations in the tri-state area resulted in only five no shows out of the seventy-four students that had registered for the Shabbaton. Senator Simcha Felder welcomed everyone to New York and was followed by Mr. Harry Rothenberg who delivered an inspirational talk.

Friday morning, the students were jointly hosted by the Harbor Group and Outerstuff Ltd. in midtown Manhattan, where they heard from R’ Saul Lubetski and R’ Andrew Penson. Being exposed to baalei batim who talked about their experiences in the corporate business world and how yiddishkeit remains at the forefront on their priority list was a concept that many of the students had never comprehended before. This made a great impression on them. Although we were in a rush to get to the skating rink, many students continued to huddle around the speakers seeking advice and inspiration.

At the 9/11 Memorial, Eli Rowe regaled the group with stories of chesed that organizations and individuals did for others during the 9/11 attacks as well as the amazing kindness and care that yidden act with on a day to day basis.

After a spirited Friday night Kabbolas Shabbos, Rav Avrohom Schorr spoke about the power of Purim Koton and Shabbos. The students then went to eat at their hosts. The Schubert and Tabak families hosted concurrent Oneg Shabbosos. Sruli Schubert spoke about the machtzis hashekel representing the fact that yidden need each other and each Jew is part of a collective unit. Rav Dovid Gottlieb then explained that Klal Yisroel was told “ki sisa es rosh.” Counting the “head” of each yid symbolizes the inclusiveness of the uniqueness’ and individual abilities that make up every individual.

Shabbos morning, the mentor-student learning session was preceded by a Kiddush where R’ Yosef Tabak spoke about how Purim Koton, an ibber yuhr and the lunar calendar all convey the message that  the ruchniyusdike and gashmiyusdike worlds come together and one must learn how to properly have the gashmiyus elevated into ruchniyus.

At the Shalosh Seudos that was hosted by Agudas Yisroel Bais Binyomin, Rav Moshe Tuvia Lieff delivered a powerful drasha about Shabbos. When Rav Lieff lived in Minneapolis, his wife had a playgroup. Each Friday, the children in the playgroup would act out a Shabbos seudah where one of the children would portray the mother of the household and one would portray the father. Each “father” would make Kiddush according to the custom that he witnessed in his own home. One child would stand for Kiddush, another would sit etc. One week, one of the children lifted the becher and began to recite, “Oy! The stock market is terrible. Oy! What a hard week it was…Yom hashishi…”

When Rav Lieff said this story over at a shiur in the Stoliner Bais Medrash in Boro Park a while back, an avreich came over to him and said that his wife also has a playgroup where the children act out the Shabbos seudah. One week, the boy who was to make Kiddush that week picked up the becher and began to recite, “Mommy, thank you for preparing such a beautiful Shabbos seudah. Kinderlach, you behaved so well this week…Yom hashishi…”

A most unique “Avos Ubonim” program took place Motzei Shabbos. Rav Yitzchok Breitowitz introduced the sugya of Rodef which was followed by mentor-student learning.  Afterwards the Rosh Hayeshiva of Ohr Somayach Rav Nota Schiller addressed the Melava Malka. Yehuda Green then entertained the mentors and students late into the night.

After Rav Eisenberger’s shiur on Sunday morning, we went to the Living Torah Museum where Rav Yisroel Belsky delivered an introduction to the tour as well as warm words of chizuk.

R’ Ralph Herzka hosted a lavish farewell lunch at Café Venezia. He spoke about the guidelines that his company has in keeping to certain standards as frum Jews. Through humor, wisdom and wit, he drove home the point that one needs to have integrity, follow their ambitions and accomplish the right things in life. A couple of the students got up at the lunch and emotionally expressed how much they gained spiritually from the Shabbaton.

Many students have stated that they have become motivated by this Shabbaton to continue their spiritual ascent. In an email received the morning after the Shabbaton, one student wrote, “I am more appreciative than words can express….I had an incredible weekend and having been in a bit of a Jewish and non-Jewish lull lately this really provided me with a nice spark to continue to be productive and not stagnate”

May we be zocheh to continue seeing the “ra’av” and “tzama” for the dvar Hashem as it ushers in the days of when we will all gather together in the ultimate dance, “Od Yishama b’arei Yehuda…kol sason v’kol simcha.”