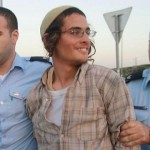 After the Israeli Prison Service allowed Meir Ettinger to speak with his wife, he ceased the hunger strike that he started on October 8, one day after he was transferred to solitary confinement and was not allowed to phone his wife, or anyone else.

On the night of Monday, October 12, administrative detainee Meir Ettinger ended his hunger strike after being allowed to speak to his close family members, including his wife.

Ettinger began his hunger strike on October 8, one day after being transferred to solitary confinement in the Eshel Prison and not being able to make phone calls with no explanation or reason given. He stated that he would end his hunger strike upon being permitted to speak to his wife.

Attorney Sima Kochav visited Ettinger over the past few days on behalf of Honenu. Ettinger has been forbidden to have any contact with the other prisoners or with his own family.

On the morning of Tuesday, October 13, the Be’er Sheva District Court authorized the transfer of administrative detainee Eviatar Slonim to solitary confinement in the Eshel Prison. Later, in the afternoon, the Central District Court is expected to rule on the decision to transfer Ettinger and Mordechai Meyer, both administrative detainees, to the Eshel Prison.

Honenu said in a statement, “We are pleased that at least Ettinger has been allowed to speak to his family. However, we object to the transfer of the administrative detainees to solitary confinement without just cause. It is important to remember that the administrative detainees have not been accused of anything and are held in remand only by the force of the Defense Minister’s signature which stemmed from inappropriate media pressure.”