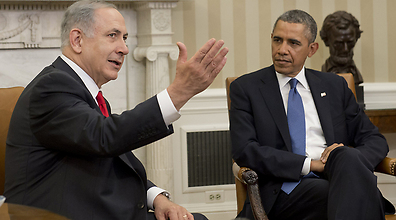 Israeli Prime Minister Bibi Netanyahu met with President Barack Obama today at the White House. Speaking to the press, Obama said that there is strong bipartisan support for Israel’s security and that the two-state solution is still possible.

Obama praised Netanyahu’s intensive efforts in the talks and reiterated his commitment to assuring Iran does not become a nuclear power.

For his part, the Netanyahu said Israel is doing its part to pursue peace, but the Palestinians haven’t. The Israeli leader said he regrets that.

Netanyahu also said the greatest challenge is Iran’s nuclear program. He said he’ll do, in his words, “whatever I must do to defend the Jewish state.”

An Israeli official said prior to the meeting of the two leaders that “there are tensions between the two. Obama’s interview (with Bloomberg) heightened tensions.”

Upon arriving in the US, Netanyahu said that “the tango in the Middle East needs at least three. For years there have been two – Israel and the US. It remains to be seen if the Palestinians are also present.”

Obama passed a subtle threat to Prime Minister Benjamin Netanyahu during an interview with Bloomberg’s Jeffrey Goldberg Sunday night, that if Israel rejects the Kerry agreement, it may face a bleak future and international isolation.

The American president claimed that Abbas is a willing partner for peace, though the Palestinians have yet to accept the conditions of the Kerry agreement. Read more at Ynet.

Leave a Reply to Josh from Brooklyn Cancel reply