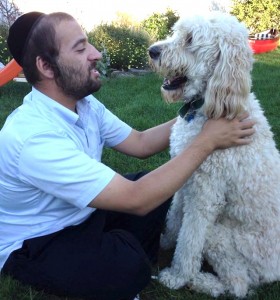 Gothamist reports: “The business, for me, is 30% rebellion, 30% comedy, and 30% for money,” said Gedalya Gottdenger. He was wearing a yarmulke, peyos, and a t-shirt screenprinted with an ostentatious cat in mirror shades. Gottdenger stroked his client for the day, a shy red-hued Retriever named Tuppance, and reconsidered his math for a second.

“I want to say the remaining 10% is my love of dogs, but really that’s the overarching reason, much more than 10%.”

An ultra-Orthodox gentleman with a giddy pup in tow may not be an odd sight to everyone, but for those aware of the cultural taboo and relatively benign stereotype that religious Jews fear dogs, Gottdenger sticks out like a bagel at a Pesach seder. 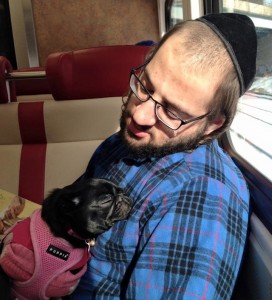 A column in the Jewish Daily Forward, a recent book of essays, and even the FAQ section of the website for Chabad describe the phenomena and offer some explanations.

“There’s a lot of theories as to why. I’m not really satisfied with any of them,” Gottdenger, 23, says. “The most common suggestion is usually about Nazis and their German Shepherds, but I don’t buy it. We were bred to be afraid…”

Like most of his peers, Gottdenger avoided dogs altogether until his early twenties. The belief that they can “smell fear,” some trainers say, can lead to a negative feedback loop of anxiety between dogs and humans.

He was able to break this pattern through prolonged exposure with his secular friend’s affectionate and clingy chihuahua who demands endless games of fetch.

“The more time I spent with her, I realized that not all dogs are scary and want to kill me,” Gottdenger said.

Unable to have a pet himself, he began to walk the chihuahua for fun, and enjoyed the interactions that followed.

“I usually get comments from Latino men. They say, ‘I never saw a Jew with a dog before!’”

While we sat on a bench outside a shop on Myrtle Avenue, a young African American employee of a shop came out with a cup of water to offer to Tuppance. He and Gottdenger had a brief chat about the dog’s age, shyness, and the weather.

Tuppance’s “Mom”, Nitza, met Gottdenger through the Jewish community in Williamsburg. They are both working towards careers in social work, and Nitza agreed to hire to him to walk Tuppance several times a week while he saves some cash for school. Two years later, he’s turned his hobby into a burgeoning career.

“He has a foot in both the Satmar community, and in the whole yuppie, hipster, whatever you want to call it community,” Nitza says.

Although she admits that what he’s doing is unique, it’s all part of the cherished melting pot character of New York. “He genuinely loves dogs, he’s very calm, very reliable. She’s not easy to get along with, but she really does like him.” 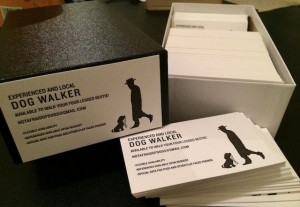 Recently Gottdenger has expanded the business by walking more dogs each day and offering to watch pets while their owners are on vacation, promoting himself with business cards and social media as “The Hasidic Dog Walker.” His card shows a traditionally dressed man looking down, perhaps with trepidation at a dog with a leash in its mouth. Above that, his email: “notafraidofdogs@gmail.com”.

“I love that as a business mantra,” says Erin Mathieu of Bed-Stuy, whose self-described “jerk chihuahua” Reno was the first dog Gottdenger walked. “It’s a wonderfully snarky response to the pigeonholing that New Yorkers tend to participate in when it comes to the Ultra Orthodox.”

Dog-walking is a standard job for those who appreciate the flexible hours, ability to work outdoors, ease and informality of working for oneself, and occasionally, the animal companionship.

“I am angry for not having a well-rounded mathematical or linguistic education,” Gottdenger says. “…it’s hard to make it, to become independent, without a well-rounded education.”