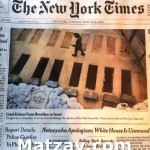 The Committee for Accuracy in Middle East Reporting in America (CAMERA), a media-monitoring organization that has been working overtime since last month’s surge of violence in Israel, has come up with a creative way of exposing bias in The New York Times‘ coverage of the goings-on in the Jewish state.

More specifically, the watchdog group is concerned with the way the “newspaper of record” has been treating the current clashes between Israeli security forces and Palestinian terrorists. Jerusalem bureau chief Jodi Rudoren is of particular interest to the media monitor, which has kept an eagle eye on what it deems to be her seriously skewed reportage. Rudoren’s raison d’etre, CAMERA seeks to reveal, is promoting Palestinian aspirations at the expense of facts on the ground.

A recent example CAMERA highlighted this week involves Rudoren’s account of a stabbing attack. In a piece on Tuesday, called “The Dueling Narratives of the Israeli-Palestinian Conflict,”  Rudoren describes the event – caught in full by security cameras near the Damascus Gate in Jerusalem’s Old City — as though its details had not been established. Quoting Palestinians claiming that the Israeli Border Policeman who shot and killed the combat-fatigue-clad knife-wielder posthumously planted the weapon on the young man, Rudoren describes the implement as a “pocket knife, the kind Boy Scouts use.”

In her attempt at “balance,” as CAMERA points out, Rudoren failed to mention that the entire event had been filmed, and its perpetrator was clearly and plainly the Palestinian terrorist. Nor, according to CAMERA, was the use of “Boy Scout” imagery in relation to the assailant coincidental.

“The guide below, complete with case studies, could have easily been written by New York Times Jerusalem bureau chief Jodi Rudoren,” is how it is introduced.

Speaking, tongue-in-cheek, on behalf of Rudoren, the blog identifies what it sees as her goal – “To promote a selected party’s allegations while pretending to report objectively about ‘dueling’ narratives” – and names four tactics employed to achieve it:

Tactic 1: Ignore and conceal the most incriminating evidence against the selected party.

Tactic 2: Cast doubt and minimize other evidence against the selected party, by using descriptions that conjure up wholesome values.

Tactic 3: Mention the existence of a video that supports allegations made by the selected party and that rebuts the other party’s version of events, even if there is no such film.

Tactic 4: If you or your newspaper are challenged on any of the above, claim space limitations did not allow you to give a “full accounting of the events.”

Beneath each “tactic” are “case studies” that link to Rudoren pieces illustrating the aspersions CAMERA continues to cast on The New York Times in general and its Jerusalem bureau chief in particular.