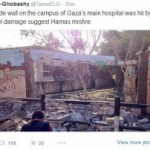 Two reporters in Gaza forThe Wall Street Journalhave deleted photographs that implicate Hamas in war crimes, namely using the Al Shifa hospital as a military headquarters, and media watchdog CAMERA, the Committee for Accuracy in Middle East Reporting in America, on Tuesday asked them why the posts were removed? So far, CAMERA has received no answers from the reporters or from their editors, but the group said the deleted posts might be further evidence of Hamas intimidating journalists.

“The Wall Street Journal‘s credibility hinges on it being transparent about what information is being withheld from readers, and why,” CAMERA wrote in a note to subscribers. “If information that casts Hamas in a negative light is being censored for the safety of journalists – The Times of Israel documented such intimidation of journalists in an article today – then readers must be informed that they are only getting a partial story.”

CAMERA said, “If readers aren’t informed, or if such information is being deleted for any other reason, the newspaper does not deserve to be seen as credible.”

CAMERA published the two photographs that had been removed. The first, from the WSJ‘s Nick Casey, and already flagged by The Algemeiner, showed Mushir Al Masri, a Hamas MP and media spokesman, in front of a backdrop depicting destroyed homes, being filmed in Gaza’s Al Shifa hospital.

Casey’s caption: “You have to wonder w the shelling how patients at Shifa hospital feel as Hamas uses it as a safe place to see media.”

The second photo published by CAMERA was by the WSJ‘s Tamer El-Ghobashy, who “suggested Hamas was likely responsible for a strike that hit Al Shifa Hospital,” the group said.

The caption read: “An outside wall on the campus of Gaza’s main hospital was hit by a strike. Low level damage suggest Hamas misfire.”

CAMERA said, “The tweet was later replaced by a very similar one in which El-Ghobashy refrained from mentioning Hamas.”

“In response to pressure on Twitter, El-Ghobashy insisted that he deleted his post because it contained speculation. But the justification is questionable,” CAMERA said. “The same reporter had no problem speculating about earlier strikes speaking on Wall Street Journal radio, where he agreed with speculation and stated that the likelihood ‘seems very very slim’ that Hamas rounds hit a UN school, and on Twitter, where he asserted as fact that Israel killed Palestinians at the school, a claim Israel challenged.”

“Ask them why Casey’s information about Hamas basing itself in Shifa Hospital, and El-Ghobashy’s educated guess that the relatively light damage of the hospital wall likely meant it was hit by a Hamas round, was censored,” CAMERA said.

CAMERA’s note was widely discussed on blogs on Tuesday. Scott Johnson, at the Powerline blog, wrote about Palestinian journalist Khaled Abu Toameh, who offered a warning to foreign reporters unaccustomed to how Hamas treats the press.

Johnson wrote: “Khaled Abu Toameh may be the bravest journalist I have ever met. He puts what is going on here this way in his excellent Gatestone [Institute] column, and he has the standing to make the point stick: ‘Journalists who are afraid to report the truth should not be covering a conflict like the Israeli-Arab one. They should go back to their editors and demand that they be reassigned to cover sports or the environment. As long as such journalists continue to operate in the region, Hamas will feel safe to bomb as many mosques as it wants and to kill as many Palestinians as it wants.'”

Over the past three weeks, many other journalists have taken down posts from social media to either avoid pressure from the Hamas spokesmen or the often hateful responses by supporters of Gaza’s war against Israel.

Hamas’s operations in the Al Shifa hospital was the focus of a report about French-Gazan journalist Radjaa Abu Dagga,who related his harrowing tale about his interrogation there by Hamas leaders for France’s Libération, which has now also removed the article.

In its stead, the newspaper wrote: “This article, which described the attempted intimidation of Palestinian journalist Radjaa Abu Dagga, correspondent for Ouest France and formerly of Libération,was unpublished at his request.”

The Financial Times‘s Jerusalem correspondent John Reed was targeted on Twitter for noting that Hamas was firing from a rocket launch site adjacent to the Al Shifa hospital, even as the wounded were being brought in for treatment. But Reed, a veteran reporter for the FT in Poland and South Africa, let his post stand.