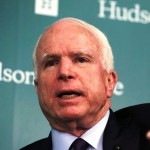 Kerry came under fire for saying Tuesday that while the January Charlie Hebdo attacks might have had a “rationale” in the terrorists’ minds because of the offensive Mohammad cartoons the satire magazine had published, Friday’s attacks were more indiscriminate.

Kerry walked back his words on Wednesday.

Still, McCain appearing on Fox News Channel’s “Your World with Neil Cavuto,” said Kerry’s statement reveals “an underlying view of these things that is harmful and is damaging.”

Kerry, he added, “probably has been the most inept secretary of state certainly in my lifetime.” As an example, he said, “The other day there was terrible things going on, these Palestinians going around with knives and stabbing people. So Kerry hops on a plane and flies over and he’s going to settle it and leaves and nothing changes.”