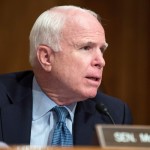 Senator John McCain called the two-hour execution of a death row inmate in his home state “torture.” Joseph R. Wood III’s drawn-out lethal injection left him gasping for air, according to those on the scene in Arizona on Wednesday.

“I believe in the death penalty for certain crimes. But that is not an acceptable way of carrying it out. And people who were responsible should be held responsible,” said McCain, who was tortured for years as a prisoner of war in Vietnam.

Arizona Gov. Jan Brewer expressed concern with the length of the execution, but said “justice was carried out.” Read more at The Washington Post.