Exclusive interview with the author of the first revised copyright language for Jewish music albums:

Mordechai Ben David, who has long been vocal about people not copying tapes and CDs of Jewish music albums, took his effort up a notch with the release of his new album, Kulam Ahuvim. In the jacket booklet, MBD devotes an entire page detailing that the CD is not being sold, but rather rented, to the buyer. The full text can be seen below and by clicking here. 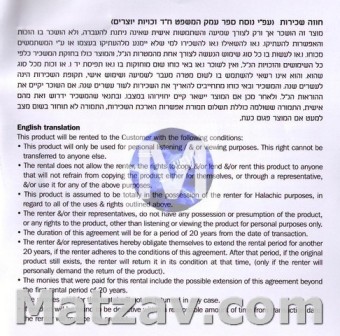 Matzav.com did some research into the language used on many other Jewish music albums and was led to Rabbi Elli Bohm, author of the renowned Halacha Berurah Publications, who is well-versed in these halachos.

Matzav.com contacted Rabbi Bohm to discuss the recent trend of Jewish music singers changing the standard copyright language on their albums and instead using an alternate language, which, it turns out, was first authored and introduced by Rabbi Bohm himself.

During our exclusive interview today, we asked Rabbi Bohm about his brainchild, how the change came about, and its various halachic ramifications.

Elisha Ferber, Matzav.com: Can you provide an overview of what has taken place?

Rabbi Bohm: I was contacted a few years ago by Rabbi Boruch Levine prior to the release of his first album, Vezakeini. Rabbi Levine was looking for a way to make copying CDs forbidden according to everyone. I told him that although copyright has strong sources in many of the shailos and teshuvos seforim since the advent of the printing press, nonetheless, all the information we have is by drawing parallels to the cases discussed. Since there is no concrete ruling or reasoning in Shulchan Aruch concerning copyright, this has resulted in various opinions being offered concerning copyright.

To the best of my knowledge, most responsible rabbonim, who understand the immense losses incurred by many publishers and producers due to the copying of their products, would never give a blanket heter to copy items. There may be differences of opinion as to why it is assur, but the bottom line is that most rabbonim would say that anything that goes beyond the parameters of normal and fair use of an item is assur.

Nonetheless, Boruch Levine pushed me more, saying that as long as there is a slight reason to permit it, one rov will say that it is mutar and everyone will say they hold like him.

Matzav.com: What was your idea to deal with this problem?

RB: I thought for a moment and told him that I noticed in recent years that Microsoft had added a clause to their copyright, claiming that it is a leasing agreement. Microsoft’s intention in doing so was to give them the ability to file for a much larger charge than just for a breach in international copyright law.

RB: A lease is different than a tenai, because with regard to a tenai, if you break the tenai by copying a CD, the producer must give you back the money you paid and you must give him back the item. Therefore, some people claimed since no one would give you back the money, that demonstrates that the tenai was not meant seriously. A breach in a lease, however, is a violation which does require that the seller return the money and you are nonetheless responsible for misusing his property. Concerning a lease from an akum, it would depend on whether you say, ‘Sho’el shelo midaas havi gazlan‘ by an akum. However, from a Yid, you certainly say it.

Matzav.com: When did you draft the text that is now being widely used?

RB: At the time, I sat down and drafted the following text for Boruch, which he placed on his album. Since then, the well-known producer, Yochi Briskman, has placed this text on all the albums he produces, including those from Yaakov Shwekey and Shloime Daskal.

The text is as follows:

“This CD is being perpetually leased, not sold, to the consumer by Aderet Inc., and is subject to the terms thereof. Any breach in the leasing agreement is forbidden and punishable by law. Aderet Inc. permits full usage of the CD, except actions that facilitate copying it for others.  Additionally, Aderet Inc. absolves the consumer of any damages inflicted to the actual CD. Any misuse of this CD to facilitate copying is bona fide theft according to halacha and civil law in the view of all preeminent poskim.”

Matzav.com: How did you formulate that exact text?

We also placed the term “facilitate copying for others” to permit one to make an additional copy for himself for fair personal use, such as to make a mix of several songs or to transfer it to an iPod. The reason why we chose the term “actions that facilitate” was to preclude people from making a copy for themselves and then claiming that since Aderet does not own that second copy, they can just go ahead and give it to their friend and then make another copy for themselves. Therefore, we forbade any initial action that will facilitate giving a copy to someone else.

During a recent visit to Eretz Yisroel, I had the privilege to sit by the posek hador, Rav Yosef Shalom Elyashiv, and discuss numerous topics that will be in a sefer I will be’ezras Hashem be publishing soon. The discussion of the leasing agreement came up and he fully agreed with the concept.

Matzav.com: What is the difference between the text that you wrote, which Yochi Briskman uses on his albums, and the lengthier text which MBD has used on his newest album?

RB: I only quickly glanced at the text on MBD’s album. From a superficial reading, the only difference seems to be that he is stipulating a rental term – e.g. 20 years – which renews itself. I wrote in my text that it is a perpetual lease. The concept of a perpetual lease is accepted by halacha as well as civil law.