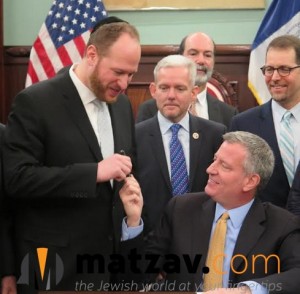 “All of New York’s children, regardless of where they go to school, deserve to be safe in school,” said Councilman Greenfield. “I am extremely grateful to Mayor Bill de Blasio and proud that after five years of hard work that our vision of protecting every child in New York City has become a reality. This law is also a tremendous testament to the leadership of Council Speaker Melissa Mark-Viverito and Public Safety Chair Vanessa Gibson. Finally, I am especially thankful to the Orthodox Union, the UJA-Federation of New York, Agudath Israel of America, the Sephardic Community Federation, the Catholic Community Relations Council, the Archdiocese of New York, the Diocese of Brooklyn & Queens, the Islamic Schools Association, the Muslim Community Network and SEIU 32 BJ building service workers’ union for their passionate advocacy and tireless support that has led us to this historic day.” Greenfield also responded to critics of his bill at the bill signing with the following, “Finally, I want to repeat something that the Mayor said an hour ago at the incredible interfaith breakfast I attended – separation of church and state doesn’t mean we treat the church worse. It means that no one gets a preference, but that certainly we treat the church the same – equally. That’s what this bill does. Our city decided years ago that children deserve to be protected before something happens because they are children. All we are doing today is extending that same protection to non-public school children. That’s something we should all be proud of.”

Mayor Bill de Blasio acknowledged Councilman Greenfield leadership in passing this legislation and for putting together a diverse group leaders in support of Greenfield’s law, “David, I thank you for your hard work on this issue and the wonderful coalition of people who worked together.”

“This first-of-its-kind program in New York City is going to help keep more of our children safe, regardless of what type of school they attend,” said Speaker Melissa Mark-Viverito. “The Council is proud to lead on this landmark public safety measure and we look forward to its implementation.”

“Every student needs a safe environment in which to learn,” said Council Member Vanessa L. Gibson, Chair of the Committee on Public Safety. “As biased and nonbiased related violence rises on campuses and in classrooms around the country, it is essential we find creative solutions to maintain security in all our schools. The safety provisions Int. 65 will provide to non-public schools meeting certain criteria will make our non-public schools, and by extension our City, safer for students, parents, and educational professionals everywhere. I thank Council Member David Greenfield for his tireless leadership on this effort and thank Mayor Bill de Blasio and Speaker Melissa Mark-Viverito for recognizing the need to protect the public safety of all children.”

“This legislation reflects our responsibility to ensure the safety of every child in this city, no matter what school they attend. As security threats grow in New York City and around the world, we are doing what is necessary to ensure a safe learning environment for all of our students. I applaud Mayor de Blasio, Speaker Mark-Viverito, Council Member Greenfield and advocates across this city whose leadership will provide a measure of much-needed protection for students regardless of their background,” said Council Member Mark Levine, Chair of the City Council Jewish Caucus.

“All students deserve to have safe, protected and supportive learning environments free of fear or harm. The agreement reached by the Council and the Administration is an innovative approach that will safeguard public resources while ensuring student safety in schools. This is a victory for all parents, teachers and students that will heighten public and school safety across the City,” said Council Member Ritchie Torres.

“New York City has a commitment to keeping every one of its students safe regardless of the type of school they attend. The Finance Committee and I are proud to support Intro 65 to equalize the distribution of security officers at schools across New York City; and I commend Council Member Greenfield for identifying this need in our communities,” Council Member Julissa Ferreras-Copeland, chair of the Committee on Finance.

Currently, every New York City public school receives security provided by NYPD school safety agents regardless of its size, location or the particular threats to campus security. Non-public schools, on the other hand, have until now had no comparable security guarantee – despite the fact that approximately one in five New York City students attend non-public schools and the unique risks that many of those non-public schools face. The enactment of Councilman Greenfield’s legislation marks a significant step toward repairing that inequity and securing the next generation of New Yorkers from would be attackers, whether spurred by mental illness or extremist ideology. Capped at $19.8 million in its first year, the program is a worthy investment in a safer city.

In addition to providing peace of mind to parents whose children attend non-public schools, the bill will also create as many as 500 new prevailing wage jobs for security officers who must be licensed and work for a licensed agency. Accordingly, the program supports the goals of increased access to living wage work and decreasing income inequality. The bill provides for uniquely tailored training for security guards to provide them with the expertise needed to work in the city’s diverse non-public schools and keep New York’s children safe.

The bill was overwhelmingly approved by the City Council in December, passing with 43 votes in favor and only 4 votes against from the Council’s 51 members.