The Religious Zionist publication Mayanei Hayeshua has made an exception from the code it had adopted, and has published pictures of women victims of terrorist attacks in an expression of opposition to the deal for the release of Israeli soldier Gilad Shalit. Mayanei Hayeshua has dedicated the front cover of its weekly publication to the cause, and dozens of pictures of terror victims, most of them women, were published in the weekend edition.

Alongside a caption saying, “Veshavti veshalom el bais avi – And I return in peace to my father’s house” from Parshas Vayeitzei 28:21, Gilad’s face appeared on the magazine’s cover against a background of dozens of pictures of men and women, young and old, who were killed in terrorist attacks in recent years.

Underneath the pictures is the headline: “Together with praying for the release of Gilad Shalit, we will ask that Hakadosh Boruch Hu guide the decision makers with good advice that will prevent the abasement of the Israeli nation and will not result in bloodshed.” 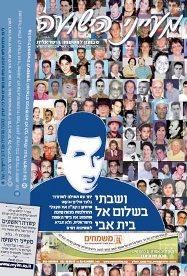 Mayanei Hayeshua‘s editorial staff has generally not published images of women in order to maintain a level of tznius.

Mayanei Hayeshua Director Avihai Boaron commented on the exception in policy: “It’s all nonsense. The movement is indeed opposed to bringing back Gilad Shalit in exchange for a thousand murderers and the risk of slaying hundreds of Jews. It is true that we avoid publishing pictures of women in accordance with instructions from our rabbonim, because the Mayanei Hayeshua weekly is distributed at shuls. However, publishing the passport pictures of the terror victims is not even a slight waiver on this. Whoever thinks it is, or whoever finds himself ‘affected’ by faded a faded passport picture of a soldier murdered by a terrorist, needs to get help for himself.”