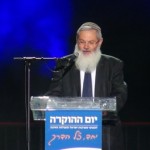 A central event was held Sunday night at the Yerushalayim Payis Arena as part of the annual day to honor the 80,000 wounded IDF veterans and wounded terror victims in Israel, Arutz Sheva reports.

Taking part in the event, which was attended by numerous dignitaries and MKs, was Hadas Mizrachi, the wounded widow of Police chief superintendent Baruch Mizrachi. Mizrachi was murdered just before Pesach 2014 by an Arab terrorist released in the 2011 Gilad Shalit deal, in which a total of 1,027 terrorists were freed.

“This evening is very special for me,” said the widow. “It’s a day that gives a lot of strength to continue, and the nation of Israel embraces us. I hope that throughout the year we won’t need to fight for our rights. It’s very difficult to hear that every day more families that are wounded and murdered join us.”