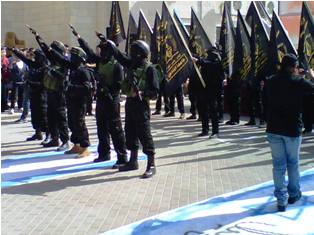 With a backdrop of huge posters showing armed fighters and martyrs, the students carry flags with maps showing all of Israel as Palestine, not just the West Bank and Gaza.

Al-Quds University, often described as “moderate” by Western journalists, receives grants from European governments and charities, and has partnered with U.S. universities.