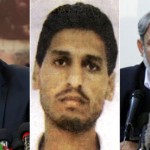 “Mohammed Deif is alive,” Mashaal said. “Israelis failed to kill him. But they succeeded in killing his wife and his two children. … Mohammed Deif is still alive, and will continue to fight the Israeli aggression and occupation. Inshallah [God willing].”