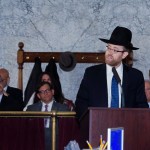 Baltimore, MD – On Thursday April 24, 2014 Karen Chaya Friedman was sworn in as an Associate Judge of the Circuit Court for Baltimore City. Judge Friedman has been a Judge on the District Court since 2010 and previously was a Judge on the Orphan’s Court.

Over three hundred people attended the investiture ceremony. In attendance where many prominent Judges from all levels of the judiciary including Federal Judges. The elected officials that attended included, US Senators Barbara Mikulski and Senator Sarbanes (Ret.), Congressmen John Sarbanes and Elijah Cummings, Mayor Stephanie Rawlings-Blake, State’s Attorney Gregg Bernstein, Delegates Sandy Rosenberg and Delegate Jon Cardin who is a current candidate for Attorney General, Council woman Rikki Spector among other public servants.

The ceremony began with the formal entrance of the Baltimore City Circuit Court Judges and was presided over by Circuit Court Judge Alfred Nance. The invocation was delivered by Judge Friedman’s brother Rabbi Shlomo Dickman who gave a beautiful sermon on how Judges in their capacity in rendering justice are in essence Hashem’s partners in the world’s creation. Senator Mikulski and Congressman Cummings addressed the crowd and mentioned Judge Friedman’s commitment and passion for her community and her accomplishments.

In addition to Judge Freidman’s academic excellence at the University of Maryland Law School she was a trail blazer in her involvement in CHANA an organization that provides counseling and services to women who are victims of domestic abuse in the Jewish Community and her leadership in the Elijah Cummings Youth Program in Israel that that works with inner city youth. Judge Friedman addressed the crowd by thanking her husband, internationally revered Jewish advocate, Howard Friedman, her parents and her entire family for the support they have given her during her career. She noted how surreal this moment was as a grandchild of Holocaust survivors that this Country has given her the opportunity to attain the powerful and prestigious position of Circuit Court Judge.

Following the investiture there was a reception held where the attendees were able to greet and congratulate Judge Friedman on her new position. All that were in attendance could not help but comment on Judge Friedman’s brilliant legal acumen as well as her ability to empathize with all members of the Baltimore City citizenry.

If her past performance is an indicator of her future results, all agreed that she is extremely well suited for this new role and are confident that she will be an overwhelming success. The Community thanked Governor Martin O’Malley for making the well-deserved appointment.