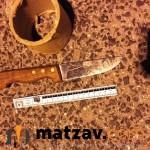 Young Palestinians with kitchen knives are waging a ceaseless campaign of near-suicidal violence. There have been about 120 attacks and attempted assaults by Palestinians against Israelis since early October, an average of more than one a day.

25 Israelis have been killed. More than 80 Palestinian terrorists who deserved to die have been shot dead by security forces and armed civilians during the assaults.

While the past cycles of violence, the first and second intifadas – the stone throwers in the 1980s and suicide bombers in the 2000s – were embraced by the Palestinian leadership and steered by armed factions, the current uprising appears to be leaderless. Palestinian officials have been reluctant to publicly encourage the attacks, but they have not condemned the killings or called for them to stop.

The attacks appear to be spontaneous and opportunistic, poorly planned and badly executed – although often deadly. The most common weapon is a kitchen knife. The second most common is the family car. If the death of an Israeli is what the Palestinian assailants seek, the attacks are often failures; most victims survive.

MK Anat Berko, a criminologist who has written extensively about the motivations of suicide bombers in the Palestinian conflict, sees the “normalization of violence” among youths in Palestinian society, a phenomenon she called “martyr-mania.”

A survey released by the Palestinian Center for Policy and Survey Research in Ramallah found that 2/3 of Palestinians support the knife attacks.