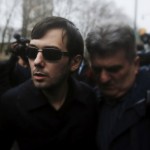 Ron Tilles, the chairman of the board of the privately held company, will serve as interim chief executive until a formal replacement is named, according to a Turing news release.

Shkreli’s stunning arrest on Thursday stemmed from previous hedge fund and biopharmaceutical companies he owned and later left. He founded Turin in February, and also became the CEO of KaloBios Pharmaceuticals in November.

Federal prosecutors allege Shkreli orchestrated three interrelated fraud schemes from September 2009 through September 2014, using investors’ money from one company he opened to illegally pay off debts owed to a previous business he started.

Prosecutors said Thursday the 32-year-old entrepreneur ran his ventures “like a Ponzi scheme.” Also charged in the alleged scheme is Evan Greebel, who served as an attorney for one of Shkreli’s past companies.

Shkreli, who lives in midtown Manhattan, was released on a $5 million bond after pleading not guilty to the securities fraud charges.

He tweeted Thursday night that he was “glad to be home.” He faces up to 20 years in prison if convicted.

As head of Turing, Shkreli became vilified worldwide when he announced in September that he was ratcheting up the cost of life-saving pill Daraprim from $13.50 to $750 per tablet. The drug is used to help people with compromised immune systems, including HIV patients.

The company later said it was reversing the decision after headlines declared Shkreli the “most hated man in America.”