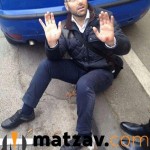 The head of the Jewish community in the southern French city of Marseille has urged local Jews to avoid wearing a yarmulka in public, a day after an attack on a Jewish teacher by an Islamic State-inspired Muslim.

“Not wearing the kippah can save lives and nothing is more important,” Zvi Ammar told the La Provence daily newspaper. “It really hurts to reach that point but I don’t want anyone to die in Marseille because they have a kippah on their head.”

On Monday, a 15-year-old Turkish Kurd attacked a Jewish teacher, Binyomin Amsellem, who was wearing a yarmulka, with a machete. Amsellem sustained injuries to his shoulder and hand.

“We should not give in to anything, we will continue to wear the kippah,” he said.

France, which is home to Europe’s largest Muslim and Jewish communities, has been under a state of emergency since Islamic State terrorists murdered 130 people in Paris on Nov. 13.

Marseille is home to about 80,000 Jews, the third-largest urban population of Jews in Europe after Paris and London.

The French Jewish community on Sunday marked the first anniversary of the Islamist terror attack at the Hyper Cacher kosher supermarket in Paris. Four Jews were killed in that attack.