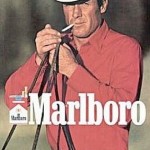 During the late 1970s, Lawson appeared in print Marlboro ads as a ruggedly masculine cowboy and was himself a lifelong smoker since the age of 14.

In later years, he parodied the famous ads with an anti-smoking commercial, but continued to struggle with smoking until his diagnosis of COPD.

“He knew the cigarettes had a hold on him,” said his wife, Susan. “He knew, yet he still couldn’t stop. Read more at The Washington Post.