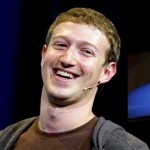 Facebook chief executive Mark Zuckerberg penned an open letter Tuesday announcing both the birth of his first child — a girl named Max — and his plan to eventually donate 99 percent of the company stock owned by him and his wife Priscilla Chan, shares worth today about $45 billion.

Zuckerberg said he and his wife Priscilla Chan plan to contribute the bulk of their wealth to “advance human potential and promote equality for all children.”

A federal filing by Zuckerberg lays out the donation’s timing. The Facebook executive will give away no more than $1 billion a year for the first three years of the commitment. To help do so, Zuckerberg said he was launching the Chan Zuckerberg Initiative, an organization aimed at doing philanthropy, advocacy and “other activities for the public good.”

Zuckerberg’s announcement catapults him to the top of the list of business billionaires who have committed to donating the bulk of their fortunes to charity. Bill Gates, former head of Microsoft, already has donated almost $30 billion to the Bill and Melinda Gates Foundation, with pledges to continue giving. Warren Buffett has given billions to charity, as well. Gates and Buffett a few years ago initiated the Giving Pledge, which encourages billionaires to give the bulk of their fortunes to charity.

More than 130 billionaires have joined on, including Judy Faulkner, founder of electronic health records company Epic, who reportedly said she plans to give away 99 percent of her money. Also this year Saudi Prince Alwaleed bin Talal, one of the richest men in the world, said he plans to eventually give away his entire fortune, more than $30 billion, to philanthropic causes.

Zuckerberg’s message Tuesday doesn’t mention the Giving Pledge, but clearly his intentions are just as bold.

He wrote that he and Chan were inspired by Max’s birth to address the world’s biggest problems and did not want to wait.

“I will continue to serve as Facebook’s CEO for many, many years to come,” Zuckerberg wrote, “but these issues are too important to wait until you or we are older to begin this work.”

Dan Marcec, a spokesman at Equilar, which analyzes corporate compensation said the move “speaks to the fact that they’re looking to do more with their money than just put it in a bank.”