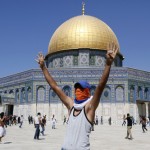 Pundits have explained that the current violence is the result of incitement on Palestinian social media. But interrogations of the attackers by Israeli investigators reveal a different picture.

Many of the attackers do not have accounts on Facebook, or on any other social networks. The online videos urging attacks on Jews have not reached them.
They were motivated to strike by incitement of the old variety: conversations, coffeehouse chatter, word of mouth. A number of the attackers set out within an hour of hearing a rumor of the “murders” of Palestinians by Israel.

The most prominent media outlet cited by the attackers as influencing their decision was Hamas’ al-Aqsa TV, which has a wide following in the West Bank, along with Islamic Jihad’s channel and two others: al-Quds and Palestine Mubasher. All are contributing to the terrorists’ sense of mission.