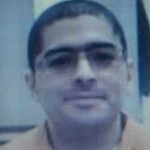 The manhunt for Nashat Melhem, the Arab citizen who murdered two Israelis Friday afternoon in a shooting attack at a pub on Dizengoff Street in Tel Aviv, is continuing today, four days after the attack on one of Tel Aviv’s busiest streets.

Alon Bakal (26) and Shimon Ruimi (29) were murdered in the attack and several others were wounded, and an hour later the body of taxi driver Amin Shaban was found shot dead in the north of the city. Police are still trying to figure out whether Melhem murdered the taxi driver as well, or whether his murder was a robbery that went awry.

The cell phone of Melhem, was found by a student in a side road Ramat Aviv, a suburb in the city’s north. The discovery was reported on Sunday evening by Israeli television channels 2 and 10.

The student came across the phone at about 2pm on Friday afternoon, on Riding Street – a main road in north Tel Aviv. She took it home and told her father about the discovery. When they turned the phone on it began to ring frequently with calls from Arabic speakers.

One of the calls made to the phone came from one of Melhem’s employers, who was trying to make contact with him. The father and daughter initially assumed that the phone belonged to an Arab laborer who would be coming back to work in the area on Sunday.

Only after the father and daughter saw the name of the suspect on the news on Saturday evening did they connect the phone to the attack and called the police, who came to collect the phone.

Over the past six months Melhem, 29, a resident of A’ra in the north of Israel, had been working in different places around Ramat Aviv. Some of the residents knew him from handyman work he’d been doing in the area.

Someone who worked with Melhem said: “I worked with him for a few days, but I haven’t been questioned by anyone, not by police or anything. I know his direct employer was interrogated.

“The situation is unpleasant for everyone,” the colleague continued. “It’s not a matter of guilt or not. The guy was an Arab-Israeli – his dad was a police volunteer, he didn’t need a permit to work – on the contrary, laborers from the territories undergo vetting and Israeli citizens don’t.”