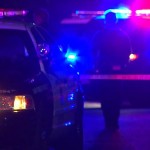 A heavyset woman with facial hair stabbed a man when he approached a group in East Village in San Diego Wednesday evening, police said.

The 39-year-old victim walked up to the group standing at 300 Park Boulevard and asked them for a cigarette at about 7:40 p.m., San Diego Police said.

According to police, as he was talking to them, a woman approached the man and told him to get away.

The woman then stabbed the man in the left side of his neck, police say. She was last seen running south on Park Boulevard.

The victim was taken to the hospital with nonlife-threatening injuries.

The suspect is described as a light-skinned woman weighing around 400 pounds “with a beard.” She was wearing a white shirt and jeans at the time of the attack, according to the SDPD.