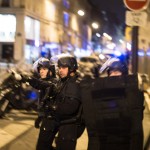 A masked man yelled support for ISIS as he stabbed a French kindergarten teacher in the throat Monday morning, authorities said.

The teacher, who is hospitalized with nonlife-threatening injuries, was in class in the Paris suburb of Aubervilliers when the man attacked, French newspaper Le Parisien reported.

It said the unarmed attacker had on a balaclava, and used a sharp item found in class to slash the teacher. The students were not in class at the time, the paper said.

“This is a warning, this is only the beginning,” the attacker said, according to a statement from Bobigny district prosecutor’s office.