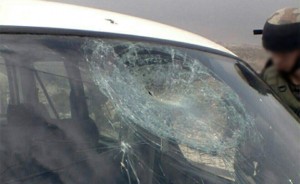 At roughly 9:55 a.m. on Sunday, a stabbing attack took place at the entrance to the settlement of Metzad in Gush Etzion. Palestinian terrorists stabbed an Israeli driver and moderately injured him.

The incident occurred after stones were thrown at the vehicle that the Israeli citizen was driving. He got out of the car after the stones had been thrown and it and was stabbed in his upper body by the terrorists, who were dressed up as yeshiva students. Magen David Adom (MDA) paramedics called to the scene gave the wounded man initial medical treatment inside the ambulance.

The Israeli man presumably shot one of the terrorists that stabbed him and may have injured him. Nonetheless, he managed to get away.

“When we arrived at the scene we saw a car standing at the side of the road with its windshield shattered. A 58-year-old man was waiting nearby. He was fully conscious,” an MDA paramedic stated. “We noticed he had sustained a stab wound in his upper body and another wound caused by a stone in his head. We gave him initial medical treatment and evacuated him to the hospital in moderate but stable condition.”