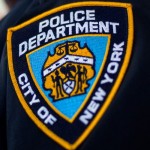 After being put into a chokehold by one cop and having his head slammed against the sidewalk by other officers, a 400-pound asthmatic father from Staten Island died on Thursday. “I can’t breathe! I can’t breathe!” Eric Garner, 43, was seen shouting as at least five NYPD officers took him down.

Garner, who was married and had six children and two grandchildren, eventually stopped fighting and appeared to go unconscious as paramedics were called.

The incident was recorded on smartphones by an angry crowd.

According to police, Garner had a record for selling untaxed cigarettes, and so cops went to arrest him after seeing him selling them on Thursday.

The police claim he “was being placed in custody, went into cardiac arrest and died.” However, the family says he was breaking up a fight, and that the police were harassing him and he did not have any cigarettes on him or in his car. NYPD has launched an internal investigation. Read more at the New York Daily News.