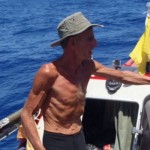 After arriving at his destination today, British adventurer John Beeden became the first person to ever row solo non-stop from North America to mainland Australia.

The 53-year-old departed from San Francisco on June 1 and arrived in far north Queensland nearly six months later. He had reportedly been rowing up to 15 hours per day. Read more at BBC.