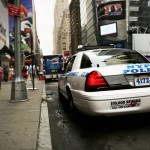 Four NYPD officers were attacked on Thursday night in Queens by a man with a metal hatchet, wounding one officer in the arm and another in the head. The latter officer is now in critical condition, while the suspect is dead after being shot by police.

The hatchet-wielder, Zale H. Thompson (who is believed to have been about 32 years old), reportedly had a criminal record in California and was discharged form the Navy for misconduct. Authorities are investigating whether the unprovoked attack is tied to recent calls by radicals to attack military or police officers.

“There is nothing we know as of this time that would indicate that were the case,” police Commissioner Bill Bratton said. “I think certainly the heightened concern is relative to that type of assault based on what just happened in Canada.” Read more at CNN.