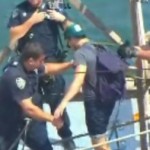 Police said Kolchin had reached the top of the tower by the time additional police personnel had arrived on the scene.

Kolchin was seen walking back and forth on the landing, taking photos with his iPhone, police said. They said once a police aviation unit was hovering at altitude next to the tower, Kolchin began to descend safely down the same way he had climbed up.

Kolchin was met by police at the security gate, where he was taken into custody without further incident.

Police said Kolchin did not cause any damage or attempt to remove anything from atop the tower.

Kolchin, who is from Russia but lives in Manhattan, was charged with reckless endangerment, obstructing governmental administration, criminal trespass and disorderly conduct.