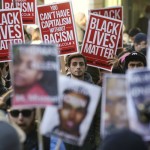 The largest mall in the United States has gone to court to try and thwart an upcoming Black Lives Matter protest on its grounds.

The Mall of America, in Bloomington, Minn., has requested a restraining order against eight leaders of the black activism movement, claiming that a previous holiday week demonstration caused irreparable damage to many of the mall’s tenants.

As such, the mall asked a Hennepin County Judge to prohibit the planned December 23 demonstration, and to block the organizers from promoting or recruiting for the event on social media. Read more at KARE11.