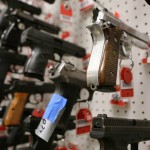 According to a new Gallup poll, conducted immediately after the community-college massacre in Oregon this month, Americans’ support for stricter gun laws is on the rise.

Some 55 percent of those polled say they believe U.S. firearms laws should be tougher, a sharp jump from 47 percent in 2014.

Additionally, the percentages of people who believe gun laws should be less strict or remain the same have both declined since 2014. Read more at Gallup.