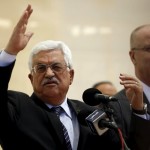 Abbas, along with other senior Palestinian officials, met with ICC chief prosecutor Fatou Bensouda at the Hague in the Netherlands on Friday.

“It is extremely important to expedite the process…because if Israel feels impunity, what will deter Israel from multiplying the victims?” Palestinian Authority Foreign Minister Riyad al-Maliki said, AFP reported.

Al-Maliki apparently handed over a dossier to Bensouda “making reference to the extra-judicial killings, home demolition, and collective punishments” carried out “in the last 40 days of Israeli aggression.”

Over the past several weeks, there have been a spate of stabbings and other terrorist attacks against Israeli civilians. Israeli leaders have blamed Abbas and other Palestinian groups such as Hamas, Islamic Jihad, and the Islamic Movement for inciting violence, particularly through their rhetoric over the Temple Mount holy site.

The meeting between Abbas and Bensouda was the first since the Palestinians joined the ICC earlier this year. Soon after joining, the Palestinians urged the court to investigate Israel for alleged war crimes during last year’s conflict in Gaza.