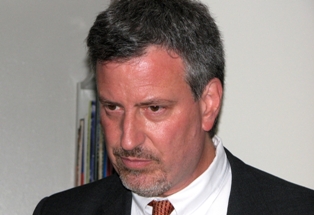 Democratic mayoral candidate Bill de Blasio is a favorite in the Orthodox Jewish community, to the chagrin of many.

Despite his liberal views and national status, Mr. de Blasio always maintained a close and warm relationship with the community, to the chagrin of many.

According to the latest polls, Mr. de Blasio leads Republican Joe Lhota 2-1 among Jewish voters, to the chagrin of many.

A review of some letters by Mr. de Blasio as obtained by NYC Elects, however, shows his insensitivity to an issue that is at heart with the Jewish community, not only in America but worldwide.

Following the shocking arrest of Sholom  Mordechai Rubashkin, the owner of Agriprocessors – the nation’s largest producer of kosher beef and chicken – The Forward ran a story about supposed work abuse and violation of wage and hour laws at Alle Processing – Meal Mart which operate in Queens, NY.

Since the Agriprocessors raid in 2008, industry experts say, Alle has become the biggest producer of kosher beef. In several interviews with The forward, Alle workers made complaints about many of the same issues that have plagued Agriprocessors: low pay, unhappy relations with management, and a lack of health benefits and safety training.

Dave Young, a regional organizing director for UFCW Local 342, who worked on campaigns with both companies, placed Alle right behind Agriprocessors in problems with labor relations.

“Do I think they treat the people as bad as Agri? No,” Young said. “Do I think they are anywhere close to what they should be? Absolutely not. It’s very similar to Agri in that they don’t have paid vacation or health, and there’s lots of favoritism.”

The company remains a leading producer of institutional kosher food, employs hundreds of workers, and has contracts with the Federal Bureau of Prisons and a number of airlines.

In July of 2009, Councilman Bill de Blasio found it important enough to report the story and the lawsuit filed to all of the five Borough presidents, urging them to terminate the City’s contracts with Alle Processing or at least not be renewed.

“Troubling information about this company has been brought to my attention, and I would like to share this with you and request your assistance in determining whether these contracts are in violation of the responsible contract language laid out by the New York City Procurement Policy Board,” Mr. de Blasio wrote.

Many in the Orthodox community still believe that the Rubashkin arrest and the actions taken against Agriprocessors were an attempt to weaken the shechita industry in the United States, as an easy target by PETA, fueled by conspiracies and hatred toward Jewish traditional practices.

The lawsuit against Meal Mart as seen by some in the Orthodox Jewish community as a continued campaign against the community.

“Where was Bill de Blasio’s sensitivity, during a time of crisis to the Jewish community in the United States?” one prominent member of the community – an advocate on shechita-related issues, who wished to remain anonymous, asked NYC Elects. “Mr. de Blasio shouldn’t have compiled on an issue that may feel was an assault on the shechita industry.”